Our China trip in detail

I thought I’d share more of the day-to-day details of our trip to China, partly because I want to remember it (I have a terrible memory and know I’ll forget if I don’t write it down) and partly because when we were planning our trip, reading other people’s experiences was so helpful. Hopefully this will give you an idea of what our time was like.

Wed., March 25 :: Our friend Mark drives Avery, hubs, and I to Harrisburg Int’l Airport and we arrive at 5:00am. Our flight leaves at 6:45am and we have a five hour layover in Chicago. At 1:00pm our flight leaves for Beijing.

Thurs., March 26 :: Our flight arrives in Beijing at 3:30pm (China time). It was a 13.5 hr. flight. We meet our guide at the airport along with a few other families from our adoption agency group who were flying in. We take a bus to the Jianguo Hotel, where we stay while we are in Beijing.

Fri., March 27 :: We meet our group in the morning at the hotel lobby and take a bus to the Great Wall. 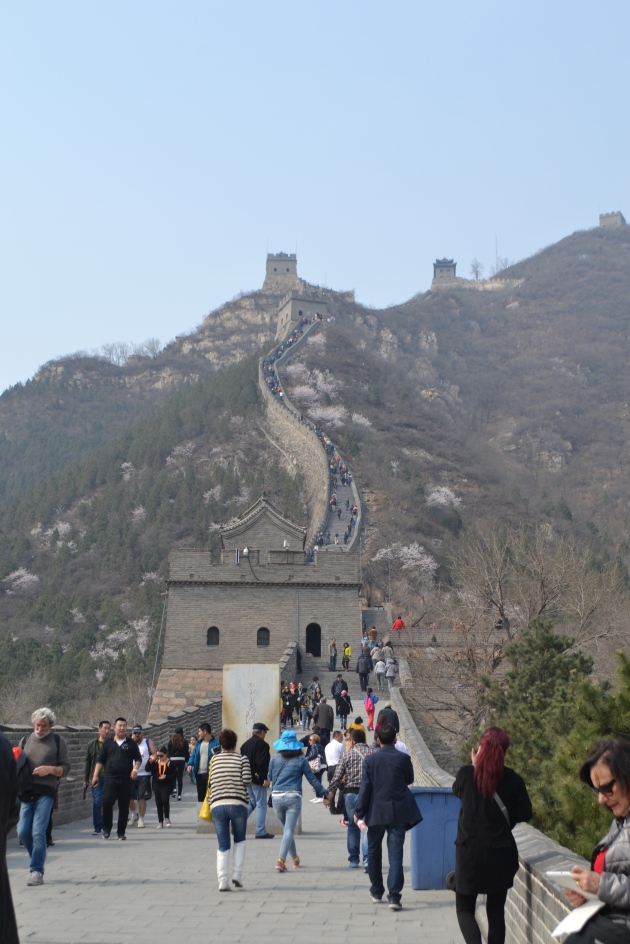 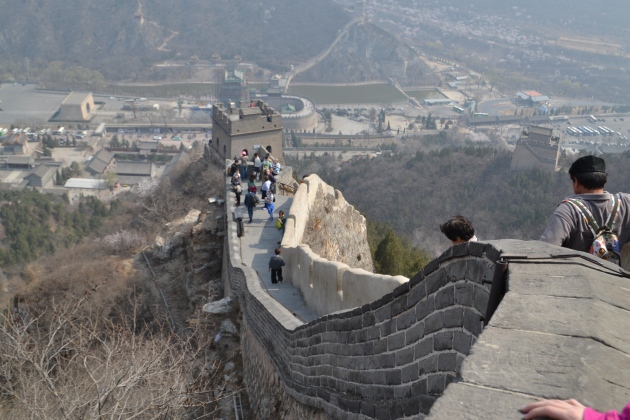 We hike for a few hours, then meet at the bus to go the the Cloisonne Factory, which is where they make ornate vases and other decorations. 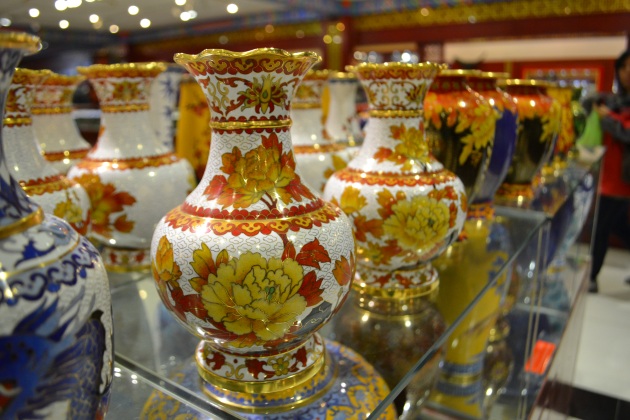 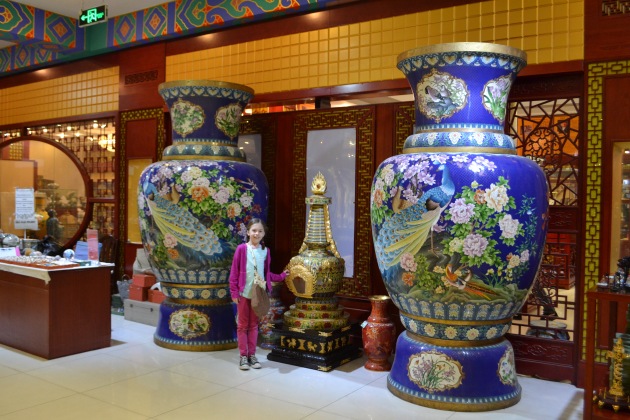 We drive to a jade store that also has a restaurant and eat a traditional Chinese lunch.

Then we drive to the site of the 2008 Beijing Olympics. It is a breathtakingly large area with many different buildings. 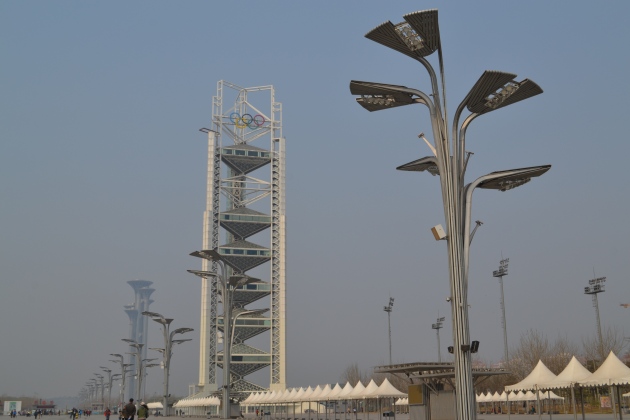 We drive back to the hotel.

Sat., March 28 :: We meet our group in the morning at the hotel lobby again and take a bus to Tiananmen Square. It is incredibly full of people! 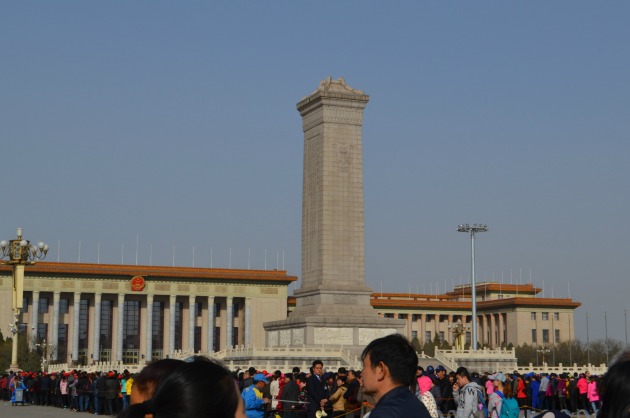 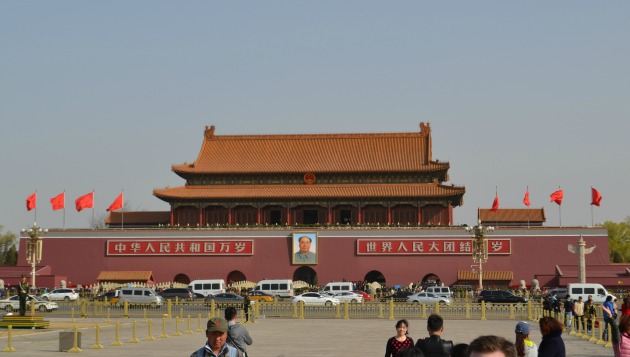 We walk to the Forbidden City and see all the attractions there. Lots and lots of walking! 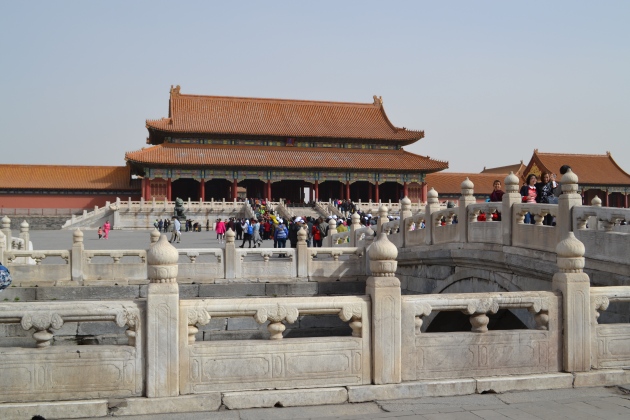 We go on a fun rickshaw ride. Our driver was hilarious. 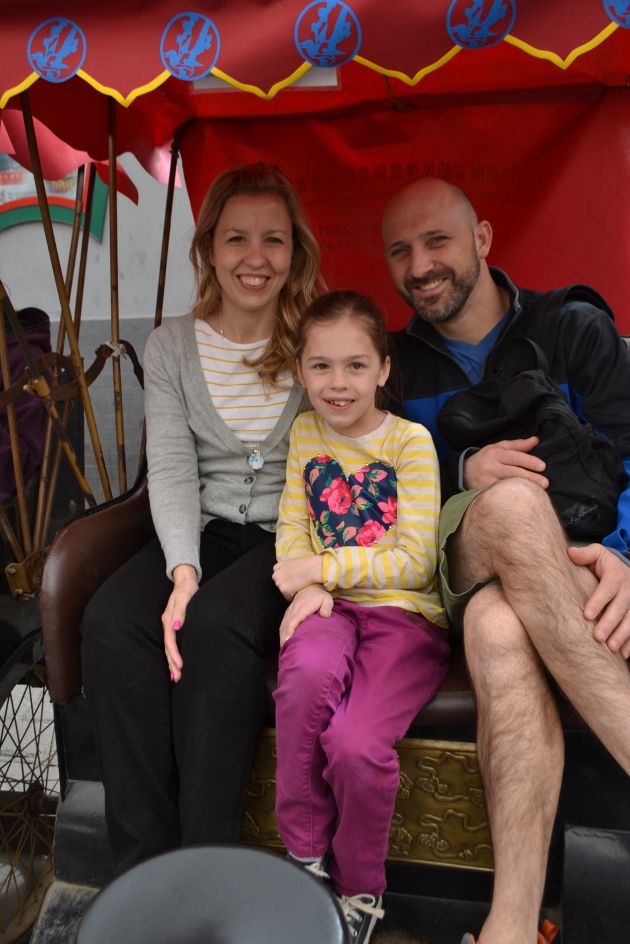 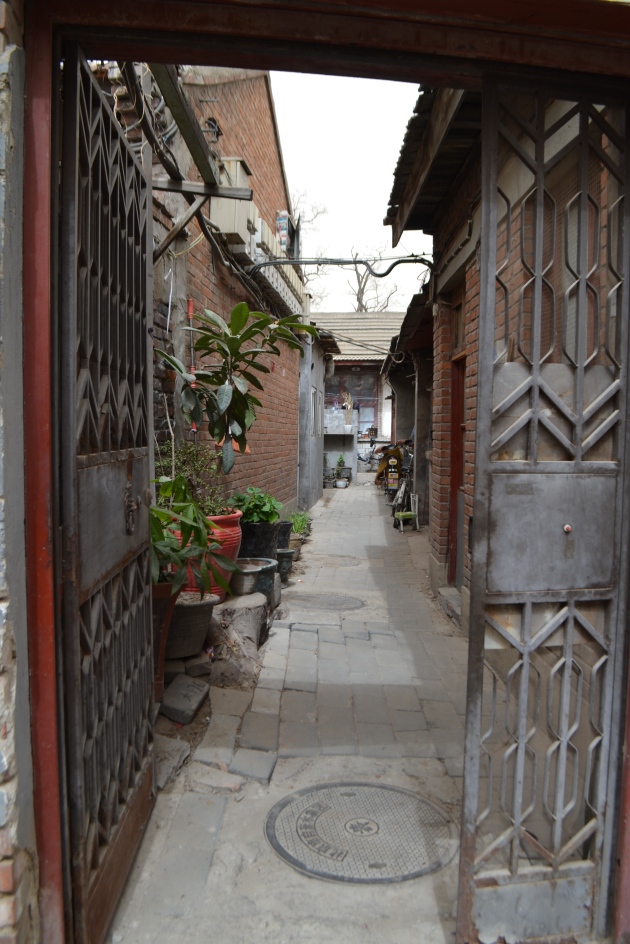 Then we take a bus to the home of someone who cooks us a fantastic traditional Chinese meal. 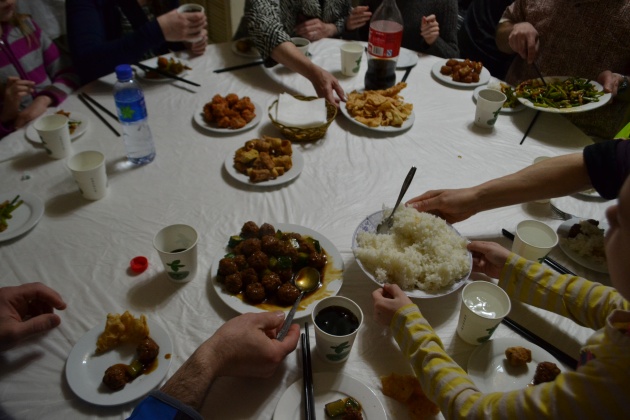 We take the bus to a theater where we watch an acrobatics show, then we head back to the hotel.

Sun., March 29 :: Our guide takes us to the train station and we take a bullet train along with a few other families who’s kids are from where Sawyer lives. It drop us off at the capital of the Henan Province called Zhengzhou. It’s in Sawyer’s province. The train ride is 2 1/2 hrs long and we see some of the Chinese countryside. 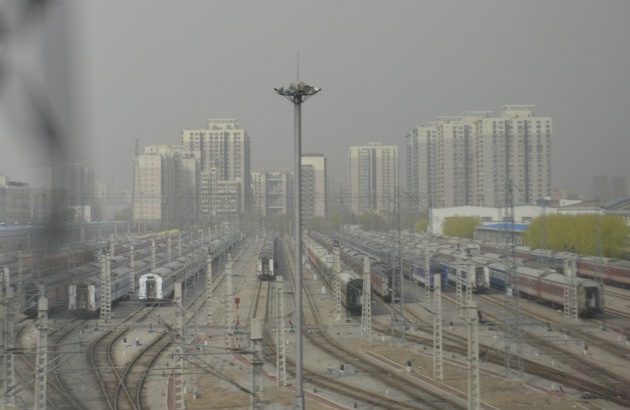 A guide meets us at the train station and takes us by bus to our hotel – The Hilton Zhengzhou. We meet some new families from our group that opted not to do any Beijing sightseeing and eat dinner with some of our group at a local Chinese restaurant.

Mon., March 30 :: The day we’ve been waiting for! We eat breakfast in the hotel, then meet our group at 9:30am in the hotel lobby. We take a bus to the civil affairs office where we are told our kids will be brought from their orphanages.

We meet Sawyer and are at the civil affairs office for a few hours filling our paperwork, then the bus takes us and our kids back to the hotel.

Tues., March 31 :: We take a bus with our group to the notary office to notarize all of our adoption paperwork. We go back to the hotel, then meet our driver and another guide and drive by car to Sawyer’s city – Zhoukou. It is a very long three hour drive! We go to the local civil affairs office to apply for his passport, where we also meet a representative from his orphanage. We ask if we could see the orphanage and he says yes! We drive a few minutes to his orphanage and spend about an hour there.

Then we drive three hours back to the hotel. It was a long, hard day of lots of traveling after just having met Sawyer and getting to know him. It was definitely our most difficult day in China.

Wed., April 1 :: Our guide takes us by bus to the airport. Our flight leaves at 1:10pm and we arrive at 3:20pm in Guangzhou. A guide picks us up at the airport and we take a bus to our hotel – China Hotel Marriot. We eat pizza at a restaurant in the hotel.

Thurs., April 2 :: We meet our group in the hotel lobby and take a bus with our kids to the medical clinic. I make the mistake of taking Sawyer by myself so that Avery and hubs can stay back at the hotel to work on homework. We take the bus to the clinic and Sawyer has to go through four different medical stations where doctors and nurses take a look at him. He was very fussy (can you blame him) and after it’s all finished we are both in tears. We take the bus back to the hotel. We walk with our group to a Chinese restaurant for dinner.

Fri., April 3 :: There is a group outing planned at a museum, but we decide to stay back at the hotel. Hubs takes Avery to a big park across the road while I hang out with Sawyer in the hotel. 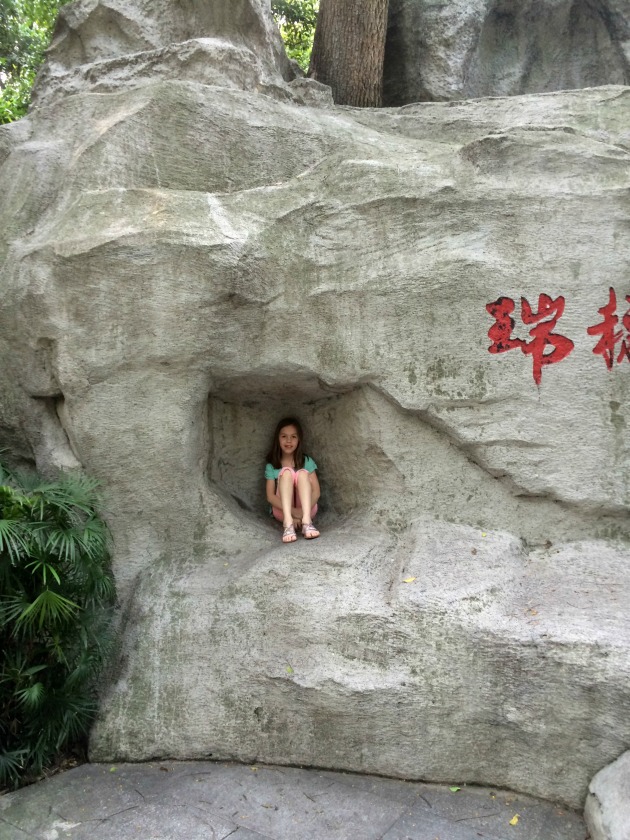 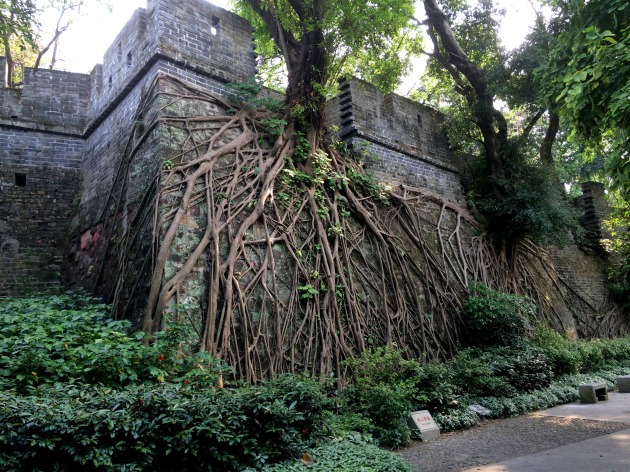 The four of us walk to a nearby Turkish restaurant for dinner.

Sat., April 4 :: We meet our group in the hotel lobby at 9:00am and drive in a bus to the Guangzhou Zoo. We spend a few hours at the zoo. Sawyer wasn’t super interested in the animals, but it was still fun. We drive back to the hotel and have a group dinner at another local Chinese restaurant.

Sun., April 5 :: We meet our group in the hotel lobby again at 9:00am and drive in a bus to Shamian Island. It’s a small island that looks very different from the rest of China. 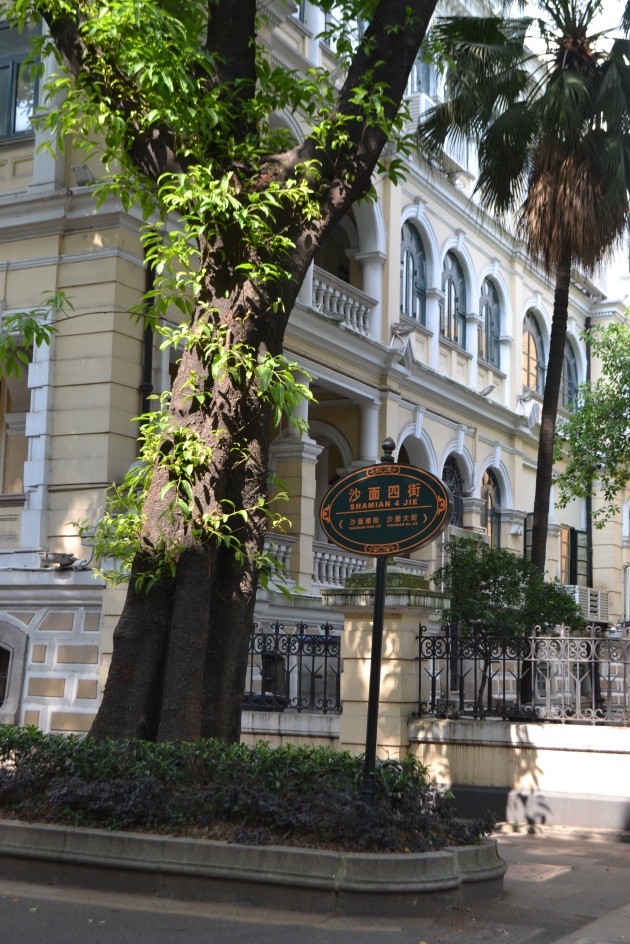 It has a Savannah feel and is really pretty. We shop for gifts and buy some traditional Chinese outfits and shoes for the kids. It is very full of Chinese tourists, many wanting to talk to us about America.

Mon., April 6 :: We spend some time at the hotel pool and the park across the road. It was a mostly free day, so we just relaxed. 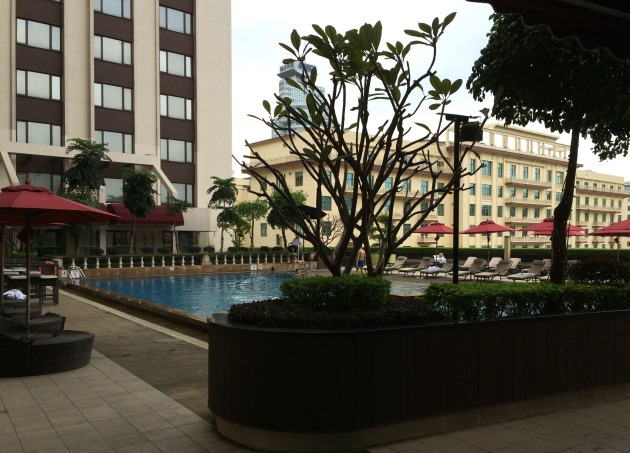 Tues., April 7 :: At 7:30am we took a bus with our group to the US consulate and had appointments to get visas for our kids.

Thankfully, it wasn’t a long process and we were back at the hotel by noon. We had dinner with our group at a local Chinese restaurant.

Wed., April 8 :: We cleaned up our hotel room and checked out around 1pm. We waited a few hours until our guide came with our completed visas and left the hotel in a van at 4:30pm. We drove to Hong Kong, which took around 2 1/2 hours and checked into our hotel – The Hong Kong Regal at the airport.

Thurs., April 9 :: We walk to the airport and our flight for Chicago leaves at 11:40am. This is the flight I’ve been dreading since we started the adoption process. And it is pretty much as bad as I expected. There were moments of calm and sitting but mostly time was spent trying to keep Sawyer occupied and in his seat. And not crying. He slept maybe two hours of the flight. It was a loooong 13 hours until we arrived in Chicago.

We arrive in Chicago around 1:00pm (Chicago time) and go through customs and immigration, which took around an hour. The airport was very full because of storms and flights being delayed and our flight happened to be one of them. It was delayed five times and we went to four different gates because of changes. We ended up being at the airport around ten hours before our flight for Harrisburg left. We were completely exhausted and hadn’t slept for over 24 hrs. It was a bit of a nightmare. I had been dreaming of seeing Violet and Jack at the airport the whole time we were in China and, because it got so late, they weren’t able to come see us when we came home. I literally thought we would never come home. But finally our flight took off.

Fri., April 10 :: We arrive in Harrisburg around 1:00am. My sisters-in-law Andrea and Heather are there, along with friends Wanda and Beth, to drive us home. It is SO GOOD to see familiar faces again!! We drive home, got a few hours sleep and got to see Violet and Jack later in the morning when my parents brought them over to our house.

The last few days we were SO ready to come home! After we got Sawyer, time seemed to go really slowly and we just wanted to get back to our other kids!

Thankfully, I was able to take my computer along and could keep up with business emails for a bit every day. Since many websites are blocked in China, I signed up for Strong VPN, which allowed me to access any website and my emails. If you are traveling to China, I highly recommend that VPN service.

Now that we’ve been back for a few days, we are right back in the swing of life and China seems like a distant memory! It was a hard trip but so good. We made some lifelong friends in the other families we traveled with, which was an great bonus. And we brought home an awesome little guy that is now a part of our family! China will forever be a big part of our lives.