"Parenting is not for the faint of heart" 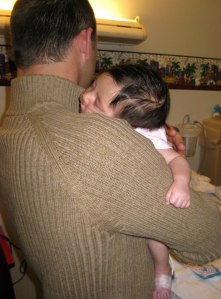 This is what our doctor told me just after he said that we would most likely be spending Christmas in the hospital. And, unfortunately, that’s what happened.

Early last week baby Violet had a stuffy nose that progressed to a cough, then on Thursday evening she had a very high fever. Our doctor met me & Violet in the ER at midnight on Thursday while hubs stayed home with Avery & Jack.

She had tests done that night which confirmed our doctor’s opinion that she had RSV-bronchiolitis as well as a secondary infection that is causing a high fever. When I took her to the ER I expected that she would be released that night, but her little body is taking longer than normal to recover from this, and we are still in the hospital.

She is getting nebulizer treatments, steroids, antibiotics and is now on an IV because she is losing weight.

Her oxygen levels aren’t staying where they should be because she can’t get much air into her lungs, so they are giving her oxygen to help. She should make a full recovery – it’s just taking her body a while to get over this.

The past few days have been a whirlwind of emotions, disappointments, missing the children, sleepless nights, sadness about missing Christmas, and all that goes with having a child in the hospital. Hubs and I have both been staying with her almost all the time, because she needs to be held in an upright position to be able to breathe well. We take turns holding her and sleeping in the cot in her room. But needless to say, we are pretty worn out.

Accepting the fact that we would be missing Christmas Eve and Christmas Day with our kids and family was hard for me to deal with. Let’s just say the holidays did NOT turn out the way we expected! But once I accepted it, I was able to move on and focus on taking care of Violet. 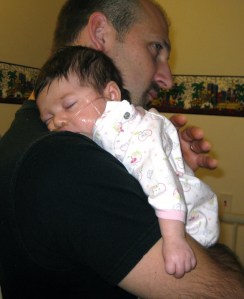 One step at a time, one day at a time, one moment at a time…I’m trying not to look too far ahead to the future or I just get totally overwhelmed. It tears my heart out to see her in pain. I think just about the worst feeling a mama can experience is to see her child suffer. For now, we are at the hospital with our sweet girl and will probably be there for a few more days.

Thanks for your thoughts and prayers!